David Walters, BLP General Manager stated, “The Board of Light & Power is proud to participate in this project, which when fully operational will provide approximately 5% of our system’s annual energy requirements. One of the BLP’s Strategic Plan goals is to diversify its power supply portfolio, and this project, along with other solar, wind, and landfill gas commitments the BLP has already made will allow for almost 25% of our system’s energy needs to come from renewable resources by 2022.”

Electricity from the first two phases of the Ranger Power project will be sold to Michigan Public Power Agency to be used by its municipally-owned electric utilities, including Grand Haven Board of Light & Power, Holland and Zeeland Board of Public Works, Traverse City Light & Power, and the Lansing Board of Water and Light. Following the completion of the project, the Assembly Solar Project will generate enough power to supply energy for more than 35,000 homes in Michigan.

Ranger Power tour guides explained to the group they have 20-year lease agreements with landowners in the townships of Hazelton and Venice in Shiawassee County. At the end of these contracts, landowners and Ranger Power may either renegotiate for more time on the land or all equipment will be removed and land will be restored to its pre-project state.

The BLP provides electricity for approximately 14,500 customers in Grand Haven and the surrounding area. 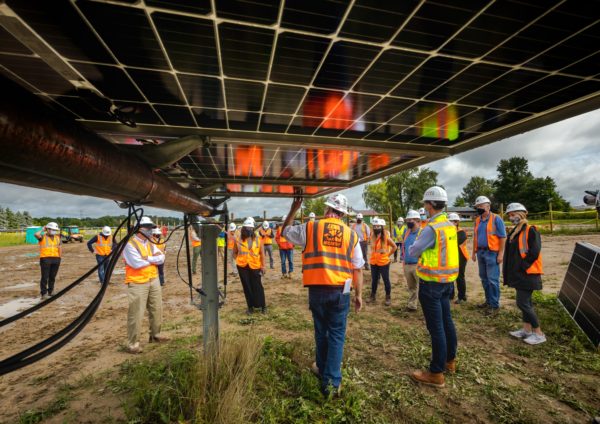