Until recent complications delayed worldwide supply chains, renewable energy installations including solar projects were on the rise, with costs decreasing as production efficiencies increased. These installations are a necessary component for meeting our national carbon reduction goal of 50% (from 2005 levels) by 2030. In spite of recent supply chain delays and other complicating factors, future large utility-scale solar projects continue to hold great promise in Michigan as part of a diversified power supply portfolio.

Large utility-scale solar projects require a significant amount of land space. According to the Brookings Institute, “Wind and solar generation require at least 10 times as much land per unit of power produced than coal- or natural gas-fired power plants, including land disturbed to produce and transport the fossil fuels.” 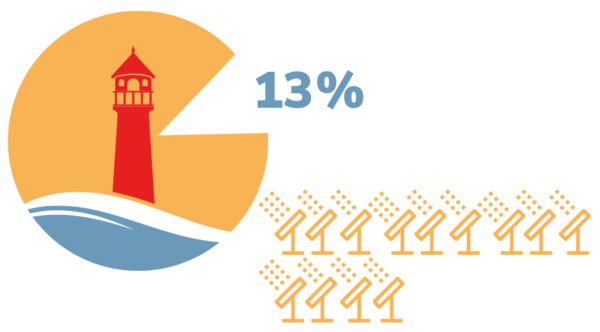 In Order to have enough solar generation to meet GHBLP’s Peak Load of 66MW (assuming the sun is shining bright), 13% of the City of Grand Haven’s Land Area (5.77 square miles) would be required.

Though solar may require more land than conventional power sources, it has made huge strides in cost and efficiency. In 2011, the Department of Energy’s Solar Energy Technologies Office (SETO) began a program called the SunShot Initiative, with a goal of making solar generation competitive with traditional generation by 2020. According to the Department of Energy, “in 2020, large utility-scale systems produced electricity at a levelized (life-cycle) cost below 5¢/kWh in locations with average sunlight, and as low as 3.5¢/kWh in the sunniest parts of the country, making it one of the least expensive forms of new electricity generation.”

Scientists have been improving silicon solar cell technology for nearly 70 years since Bell Laboratory’s first practical solar cell was created in 1954, which was 4% efficient and a breakthrough for the time. Modern commercial panels range in efficiency from 15-20% according to Energy Sage, but the National Renewable Energy Laboratory in Colorado has reported new solar technologies nearing 50% efficiency.

As communities around Michigan and the Midwest consider implementing cleaner energy sources, ideal land conditions for utility-scale solar projects and other renewable energy generation are stricter than conventional power plants were years ago. Solar farms require large, flat, unobstructed stretches of land, whereas traditional power plants are limited mainly by infrastructure for their fuel sources (rail or water for coal, pipelines for natural gas). This shift in the location of power generation raises new questions for local communities and their ordinances.

According to a 2019 study of solar ordinances done by the Michigan Office of Climate and Energy, “fewer than 20% of Michigan communities have zoning regulations in place to address all scales of SES (solar energy systems).” Without established guidance in most communities, solar permitting can face delays as a community decides on the future of dedicating land to solar. 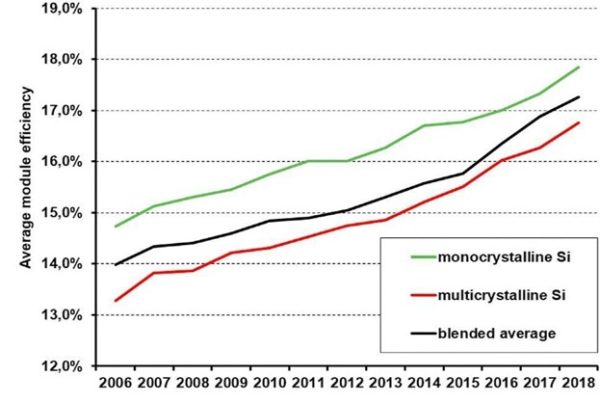 In addition to local trepidation, solar also faces a supply chain shortage in the wake of the global pandemic. “About 80% of our solar panels are imported,” said MPPA CEO and General Manager Patrick Bowland. “With tariff concerns and steel and copper shortages in the market compounding ordinance issues, it can take anywhere from 4-8 years from land acquisition to connecting solar farms to the grid.”

Supply chain delays have affected solar significantly in the last year, and Reuters recently reported that “More than 1.7 gigawatts of proposed solar capacity was canceled during the permitting stage in 2021, according to an analysis by Wood Mackenzie conducted for Reuter.”

As solar power generation becomes cheaper, more efficient, and more prevalent, we look forward to the ways in which we can sustainably power our community. Grand Haven BLP currently sources about 8% of its power supply from solar sources across the state, and this percentage will no doubt increase as newly contracted resources are installed. Learn more about what makes up Grand Haven’s power purchases at ghblp.org/power-supply-portfolio.

Click to read the full August 2022 Plugged In Newsletter