The Power Struggle with being a Peninsula State

Two seemingly unrelated topics – peninsulas and power – converge in our state to form a unique challenge for our electrical utilities. While many states contain peninsulas, only three are considered ‘true’ peninsula states—Alaska, Florida, and Michigan. Out of this already slim group, Michigan is the only state made up of two peninsulas.

Despite the benefits of tourism, conservation, and maritime trade, being a state with two peninsulas can put Michigan at a disadvantage when connecting to the regional power grid and importing power over high-voltage transmission lines.

Robert Shelley, Distribution and Engineering Manager for the Grand Haven Board of Light and Power said, “Over the last couple of decades, many states had much more generation capacity than they needed, and several decided to deregulate so they could share this extra capacity between themselves and others to reduce their costs. However, increased regulations and the economics of coal and nuclear plants also accelerated the retirement of generation assets to the point where we’re starting to see the opposite problem of having too little in-state capacity.”

Since Michigan retired many large fossil fuel and nuclear assets, (only replacing a portion of that capacity with renewable resources) the state has become more reliant on imported power from other states to balance our power supply. In the past, the lower peninsula of Michigan relied on large reserves from Indiana and Ohio, but these reserves have dwindled with coal retirements.
Michigan is currently in the process of finding the best way forward to meet future needs. The basic options are to build generation capacity from within (which is slow with current restrictions) or transmit it across state borders. Also, with the construction of a new transmission system capacity, wind resources could be transmitted into the Midwest at a lower cost.

You need land to cultivate power, especially renewable power. According to Plugged In’s November edition, Michigan landowners have grown more resistant to large-scale renewable developments. The only alternative to these developments would be a well-structured system of transmission lines to carry energy into the state. The more transmission lines you add to a regional network, the easier it is for the electricity to flow—leveling the cost of power. When the construction of new lines eliminates transmission constraints, cheaper power flows easier from generation sources to loads.

Unfortunately, Michigan is blocked on three sides by the Great Lakes, and underwater cable crossings can be cost-prohibitive. It is also cost-prohibitive to build these high voltage lines through large, heavily-populated metro areas, which Michigan is sandwiched between. With Chicago to the southwest and Detroit on the southeast side of the state, and the lakes covering the north, the only available transmission corridor (from significant generation resources into Michigan’s lower peninsula) is from the south.

Even for states with more than one entry point, getting power across borders is no easy feat. Patrick Bowland, General Manager & CEO at Michigan Public Power Agency, said, “Three large hoops need to be jumped through before transmission is built—the regulatory authority, the governing public body, and landowners.”

Out of these three obstacles, Bowland said the number one problem is getting easements from property owners. After all, “Few people are comfortable with large transmission towers and lines near their homes.”

Despite the challenges, there has been some progress. In July 2022, MISO approved the largest expansion of high-voltage transmission in US history with the 345kV “Tranche 1” projects. The Detroit Free Press reported, “Two of the 18 projects proposed are in Michigan, involving 110 miles of the new line construction and 95 miles of existing transmission line upgrades, at the cost of about $1 billion.” 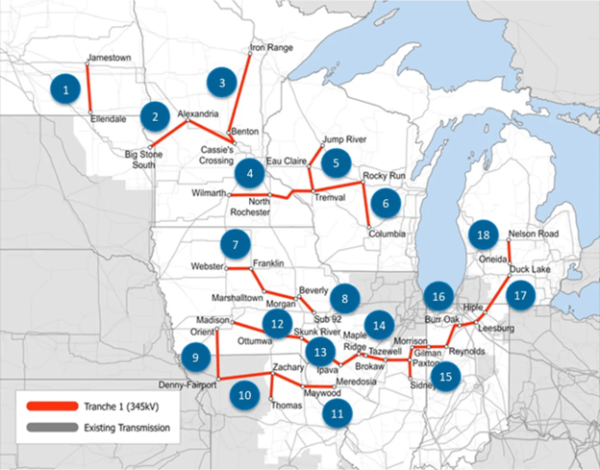 While projections show these Tranch 1 projects making a major impact in importing renewable energy from other midwest states, they still don’t meet all of the area’s needs.

A possible alternative to building transmission networks is a greater investment into distributed energy resources (DERs). The Department of Energy is exploring DERs for their benefits on grid resilience, saying ”DERs can help agencies meet goals and mandates, deliver cost and energy savings, and provide environmental benefits. An emerging application for distributed renewable energy, storage, and CHP [combined heat and power] is resilience—providing power in the event that a site loses grid electricity.”

Examples of DERs include rooftop solar units, grid-connected battery storage, backup generators, and fuel cells. Many Michiganders already rely on these methods because of their efficiency, reliability, and eco-friendliness. On October 17, 2019, The Michigan Public Service Commission, in partnership with Governor Gretchen Whitmer, established an initiative (called MI Power Grid) to, “Maximize the benefits of the transition to clean, distributed energy resources (DERs) for Michigan residents and businesses.”

The goal of MI Power Grid is to, “Determine how customer-owned generation and energy storage are changing the way energy customers use the grid.” If consumers end up relying more heavily on creating their own power with DERs, then building transmission becomes less necessary.

Bowland agreed, “We need to plan appropriately to ensure DER is part of the supply solution so we don’t over-invest in transmission.”

Proud to be a Peninsula

Shelley said the state’s next steps need to be strategic. “We need to balance retiring current assets with renewable additions, get capacity built in-state, and eliminate transmission constraints. We need to ask ourselves; what can we build locally and what can we cost-effectively bring in from elsewhere? And what is the most economically feasible mix?”

Whatever that solution is, the Grand Haven BLP, along with the other municipal members of the Michigan Public Power Agency, are continually studying the best options to control cost while ensuring reliability for all our customers. And despite these challenges, we’re still proud to serve our beautiful peninsula state.