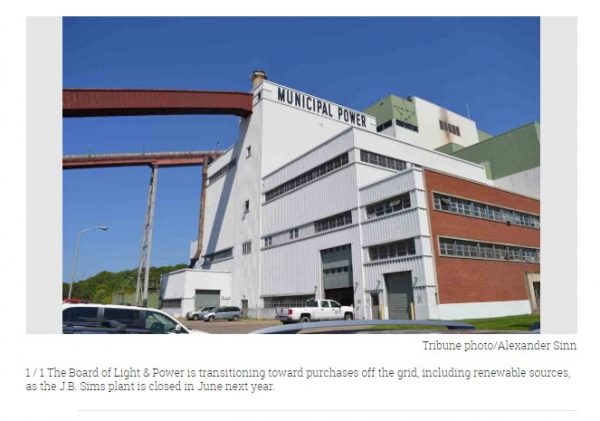 The Board of Light & Power is banking on renewable energy sources to provide the Grand Haven area’s power supply long into the future.

A wind project in the Thumb region of Michigan, to which the BLP had committed, was recently canceled. Instead of wind, the local utility will be getting increased solar power.

The BLP had invested in a 25-year plan to receive energy from the Pegasus wind project through the Michigan Public Power Agency, but swapped the investment for an increase in solar energy from a Tuscola County project. The new commitment is in addition to an existing contract with the solar project.

The new plan brings a net decrease in power costs, according to BLP General Manager Dave Walters, who spoke to Grand Haven City Council on Monday before the council approved the plan 5-0.

The swap in supplies will bring a cost savings of about $100,000 annually, Walters said, or about $2.5 million over the life of the contract.

The canceled wind project had gone through the land permitting process, Walters said, but it required Federal Aviation Administration permits due to a small airport located near the site. There was also local pushback from residents on the new turbines, he added.

The long-term contracts will help the municipal utility reach 20 percent renewable energy by 2022. The latest solar commitment will provide about 2 percent of the utility’s power, or 6,500 megawatt-hours per year, according to Walters.

The state of Michigan requires utilities to provide 10 percent of their energy from renewable sources, and that level is increasing to 15 percent. Walters said the BLP is currently in compliance with about 8.5 percent renewables, including credits banked from previous years.

The BLP is transitioning toward purchasing a majority of its power off the grid with the retirement of the Sims coal-fired plant on Harbor Island in June 2020. A gas-fired engine will provide some local power, while other options such as a community solar garden will be explored.

The municipal utility’s Board of Trustees approved the replacement of wind with solar at its May 16 meeting.

Long-term contracts are regularly brought before the City Council, while short-term purchases off the grid are usually handled without the council’s pre-approval. The City Council last year approved a resolution to bring more oversight to BLP projects, and there is an ongoing disagreement between the city and the BLP board regarding the level of oversight necessary to make energy purchases.