The end of an era by Alexander Sinn, Grand Haven Tribune 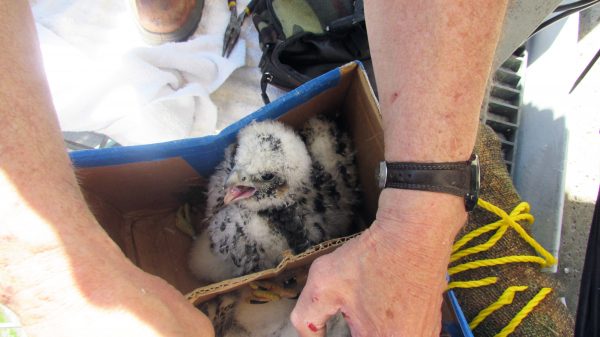 A pair of fluffy, fiery falcon chicks living high above Harbor Island will be the J.B. Sims plant’s final residents.

The closure of the Grand Haven Board of Light & Power’s coal-fired plant a year from now spells the end of the era for West Michigan’s most productive peregrine falcon chick banding site.

The two chicks, one male and one female, make 47 birds in all banded for research by the Michigan Department of Natural Resources at the Grand Haven site since 2001. The two new chicks were banded Friday morning at their home in a small nesting box midway up the stack.

The chicks at the Sims plant are a little more than four weeks old, DNR wildlife biologist Nik Kalejs said. With the help of BLP employees Derek Kean and Robert Shelley, Kalejs wrangled the chicks to attach federal and state bands to their legs that will help researchers identify them in the wild when they eventually take flight.

Michigan’s falcon banding program has helped spur a significant recovery for the federally protected and state endangered species. While the closure of coal plants throughout the region will eliminate nesting sites, Kalejs said the success of the program statewide should keep the bird population resilient.

“It’s always tough to lose a great site,” he said. “Without these artificial nest boxes, we wouldn’t be where we are. I think we’ll be OK overall as a statewide population.”

BLP spokeswoman Renee Molyneaux said an open house will be hosted at the Sims plant in early October for a chance to tour the facility for the last time. The current plan is to run the steam plant through September, or as coal supplies last.

The demolition of the coal plant is expected to take place next June.

The BLP Board of Trustees meets June 27 to review plans from contractors on the municipal utility’s future. With the closure of the aging plant, the BLP intends to make a majority of energy purchases off the grid, including renewable resources, and build a small, gas-fired plant for local production.