Michigan is working hard to transition to greener generation options. However, no amount of renewable capacity can ensure consumers get power if the wind isn’t blowing or the sun isn’t shining. Storage creates greater reliability in renewable energy supply, giving suppliers a backup when needed.

Using a definition from the University of Michigan Center for Sustainable Studies, grid storage is “the process of converting electrical energy into a stored form that can later be converted back into electrical energy when needed.”

Originating in Italy and Switzerland at the turn of the century (in the form of pumped hydro storage), grid storage has only increased in demand as utilities around the world turn to renewables and distributed energy resources (DERs). Energy Storage World Forum, a trade conference, stated, “Since the electrical grid has existed, so has the need for stored forms of energy that can be drawn on to meet times of peak demand and regulate frequency. In the past, the bulk of this extra energy came from fossil fuel plants that were [more easily] fired up and down with demand.”

Here in the US, Energy Secretary Jennifer Granholm announced a plan last summer to reduce the cost of grid storage by 90% within the decade. She said, “We’re going to bring hundreds of gigawatts of clean energy onto the grid over the next few years and we need to be able to use that energy wherever and whenever it’s needed.”

While there are many technologies contending for leadership in grid storage, there are two meetings nearing commercial viability in Michigan: pumped storage hydropower and battery storage.

The U.S. Department of Energy defines pumped storage hydropower (PSH) as, “A configuration of two water reservoirs at different elevations that can generate power as water moves down from one to the other (discharge), passing through a turbine. The system also requires power as it pumps water back into the upper reservoir (recharge). PSH acts similarly to a giant battery because it can store power and then release it when needed [See Figure 1].” 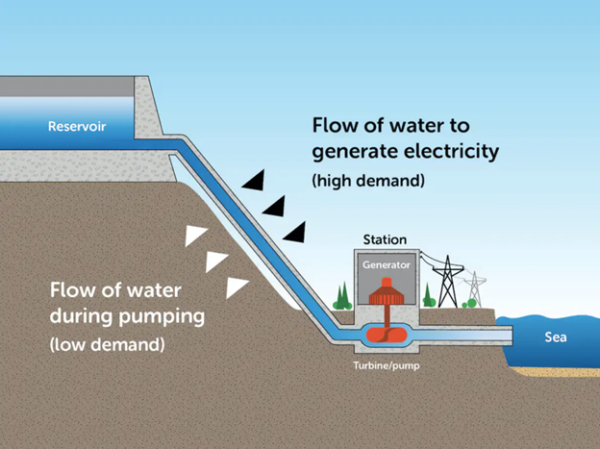 Currently, pumped hydropower makes up almost all of the world’s current energy storage at 95% (Energy Storage World Forum) and Michigan follows this trend. In fact, Consumers Energy and DTE have a 2,292 MW facility (one of the largest in the world) overlooking Lake Michigan near Ludington, which holds enough water to power 1.6 million households.

Not only does this technology make energy more affordable, but according to Consumers Energy it also “enables the plant to respond quickly to the daily, weekly and seasonal highs and lows of Michigan’s energy demand.”

“I wish we could build 10 more of these. I love ‘em,” said Eric Gustad, the community affairs manager for Consumers Energy, in a Detroit News story early in 2022. 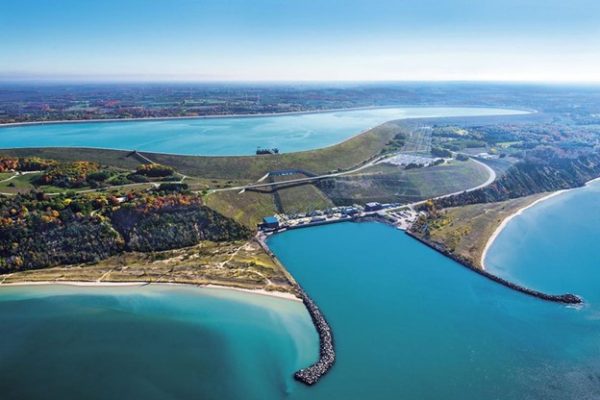 The Detroit News reported, “the nation currently has only 43 pumped storage facilities… and just one small operation has been added since 1995.” Many more have plans in the works, but “it’s unknown how many of more than 90 planned can overcome economic, regulatory and logistical barriers that force long delays.”

Despite the benefits of pumped hydropower, delays and land availability will likely force Michigan to look for alternative options.

Leading the team of scientists and engineers is Dr. Qingliu Wu, an assistant professor in WMU’s department of chemical and paper engineering. Together, they will discover ways to make high-energy lithium-ion batteries more efficient and cost-effective.

“If successful, the printing technology that we proposed for this project will further reduce the energy consumption during cell fabrication, and thus pollution to the environment,” said Dr. Wu. “In addition, the technology could also significantly reduce the cost of electrodes, and make cheaper batteries possible for customers.”

With li-ion energy increasing rapidly in the automotive industry, the density of energy storage is increasing constantly. Several pilot projects including a Consumer’s project near Western Michigan University hold some promise to test out the robustness of these solutions for the grid.

What’s Next on Grid Storage

While emerging grid-scale energy storage is not yet affordable enough for commercial use, its costs are decreasing. The greatest hurdle in utility-scale storage isn’t economic. We still need to develop long-term storage for renewable options to resolve the seasonality of these sources (ex. storing excess solar energy in the summer to use in the winter). Despite these challenges, organizations like the Michigan Public Power Agency are continually evaluating new technologies to increase the reliability and sustainability of power in our communities.